The Cow Ponies is a Milwaukee-based band founded by music veteran John Graham in 2015. Our set list includes both original music written by John (guitar, vocals) and Tom T (bass, vocals), along with old country, alt country, and cow punk covers. Andy (drums), Keith (pedal steel), and Robin (vocals, sax) round out our […]

END_OF_DOCUMENT_TOKEN_TO_BE_REPLACED

Check out our upcoming shows and listen to some original Cow Ponies music. We’re in the process of booking more shows for spring and summer, so please check back here or on our Facebook page! Our first CD, “Easy to Fall,” was released December 2, 2017 and is available on CD Baby. Here’s a taste […]

END_OF_DOCUMENT_TOKEN_TO_BE_REPLACED

For more information about The Cow Ponies, or to book us for a gig, send a message here and we’ll get back to you right away.

END_OF_DOCUMENT_TOKEN_TO_BE_REPLACED

The Cow Ponies are going on a little hiatus for a couple of months as our founder and band leader John recovers from surgery and we get our new keyboard player Jeff Stehr up to speed on our songlist. Keith Bolog, our pedal steel player, is no longer with the band—we wish him well.

Because of John’s surgery and drummer Tom Mohan’s motorcycle accident, The Rock-a-dials / Cow Ponies show scheduled for December 28 at Circle-A Café in Riverwest (Milwaukee) has been cancelled. In our place are two great bands: Resist Her Transistor (our drummer Andy is their drummer too) and Spudbucket (our bass player Tom T is their frontman). John and Robin of The Cow Ponies hope to be out here on these streets by then—we’d love to see you at Circle-A for this really cool show. 8-10 p.m. $5 cover.

In the meantime, we wish you a very happy holiday season, and we look forward to seeing you late winter/early spring with some new music, a new rockin’ line-up—and our new CD, produced by Mike Hoffman. Back soon! 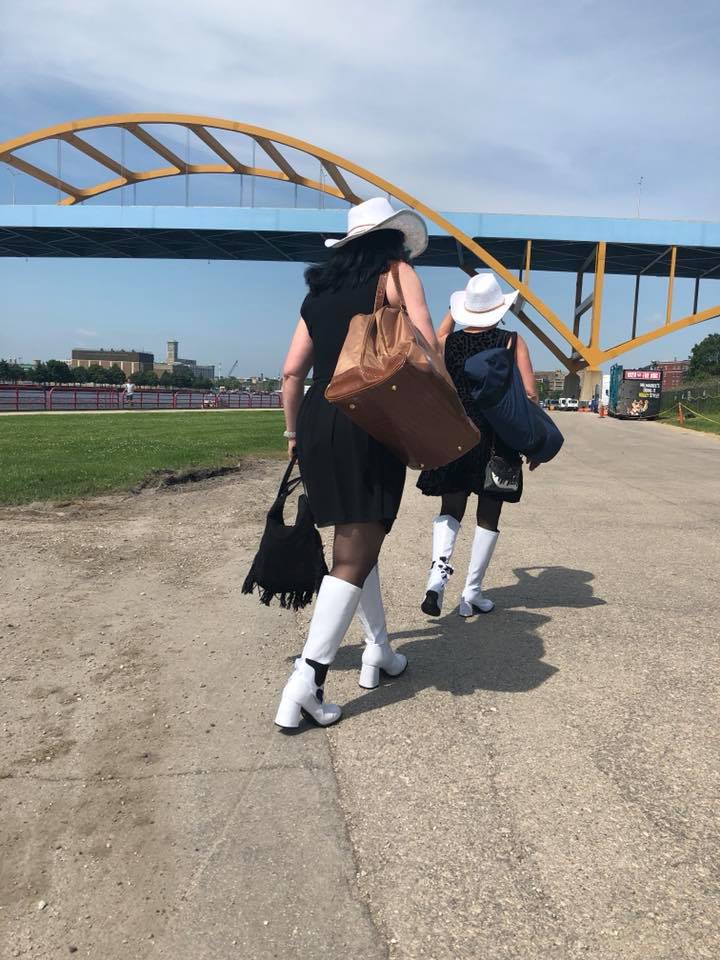 This Saturday night we’re heading down Route 32, along the lake from Milwaukee to Racine, and landing at George’s Tavern, 1201 N. Main St.

We look forward to spending time with all you wonderful folks at George’s again. Since we last played there we’ve been busy writing and recording new music, some of which we’ll be mixing with our standard originals from our debut CD, “Easy to Fall.” Our second CD is due out early 2020.

We are very happy to be heading back to Twisted Path Distillery, this time with Matt Davies, who’ll be performing a solo acoustic set. We heard from a fellow musician at a recent show that Matt’s latest release, “Flowers & Ticket Stubs,” is, and we quote, “BRILLIANT.”

We’re near the end of recording our second Cow Ponies CD with Mike Hoffman; this Friday night, September 6th, we’ll be playing some brand-new songs that’ll be on that disc. Twisted Path is located at 2018 South 1st Street in Milwaukee, on the west edge of Bay View. One-a our fave places to have cocktails, yo. #thisdrinkisbananas #drfrankenstein

Matt kicks off our evening together at 8 p.m.; The Cow Ponies hit the stage around 8:50 p.m. No cover, lil’ babies. Lookin’ forward to seeing your beautiful faces!

Cosmic International Productions is at it again. The annual international tour celebrating Gram Parsons’ music is making its second stop in Milwaukee in three years at Linneman’s Riverwest Inn, 1001 E Locust Street, on Saturday, August 24 starting at 7 p.m. and ending at 12:30 a.m. Tickets are available at GramParsons.MKE-live

Seven bands from Green Bay to Milwaukee to Chicago will play songs from Flying Burrito Bros.’ “Gilded Palace of Sin” LP. John and Robin of The Cow Ponies are kickin’ off the event with an acoustic set of Parsons songs and some of our TCP originals, including a couple of our brand-new ones.

We are happy to report that this Saturday, August 3, The Cow Ponies are headin’ for beautiful downtown Waukesha, just down Barstow from the beautiful Carroll University, where Robin teaches, to perform at Nice Ash Cigar Bar. It’s a grand old space with the largest humidor we’ve ever seen, and a gorgeous old wood bar that wraps all the way around. At 323 West Main Street, just down the street from Antiques & Uniques and Allô Chocolat!, which at least two of us consider lil’ slices-a heaven here on Earth.

Show begins at 9 p.m. and continues right up until midnight with two tiny breaks here and there. Waxing crescent moon. Hookah. Plenty of cozy places to sit and chat with friends, miles of room to dance. Whiskey. Beer. Wine. Cocktails. Specials.

Please join us, y’all! It’ll be a fun night! Thanks to Joette and Jeff for havin’ us.

We are very pleased to announce that our show at B-Town Sounds Concert Series is right around the corner. We played there last summer and loved every single second of it. Happy to be back, Burlington!

This summer finds us in the throes of making our second CD of all-original music. We’ll be layin’ some of our brand-new music on you, stuff we haven’t played anywhere but in rehearsal and the studio, and we’re really looking forward to performing it live for the first time. We’ll also be playing some old-country favorites.

B-Town Sounds takes place in Echo Park, 595 Milwaukee Avenue in Burlington. Food and beverage will be on hand–Third Space is the featured brewery. Bring a blanket; bring the lawn chairs; bring a readiness to have a good ole time.

This terrific show comin’ up is hot off the press, y’all.

When Company Brewing (735 E Center St, Milwaukee’s Riverwest Neighborhood) contacted us about playing with Dan Whitaker & The Shinebenders, it took .5 seconds for us to jump on the opportunity. #muchadmiration

Hailing from Chicago, Dan and the boys (Chi-town music veterans Two Smokes, T-Bone & Chase) play all-original honky tonk. They’ve been together since 2004 and their latest album, “Anything You Wanted To,” was released in 2017. The band is currently working on their fourth album, due out later this year. Dan Whitaker & The Shinebenders is currently touring the MidWest, and has been nominated for a 2019 Ameripolitan Award for Best Honky Tonk Band.

We haven’t yet met them in person, but we in TCP already feel like DWSB is our spirit animal. The Cow Ponies kick off the night at 10:30 p.m. Dan Whitaker & The Shinebenders take the stage at 11:45 p.m.

You know you need your head to spin in a good way, and we really wanna do that for you, so please join us. It’s gonna be a kick-ass night! xo

Cleveland got three inches of snow yesterday, but spring is sho-nuff in the air and all around here in Milwaukee. Perfect time for a Sunday Matinee at Kochanski’s Concertina Beer Hall!

At this Sunday’s live music matinee (get ready for some day drinkin’), we’re pairing up with new friends Miles Maxwell, who are coming up I-94 from Chicago to spend the first half of the afternoon (2-4 p.m.) playing their brand of blues and alt-country (check out their sound on Spotify). The band’s first CD, Red Ghost, is available on their website.

And then there’s us with our crazy alt-country cowpunk thang, which we’ll be doing from 4 to 6 p.m. We’re hard at work on our second CD with producer Mike Hoffman, starting out with our sights on an EP…but it could very well turn out to be another full-length. Stay tuned…

Until then, loves, we hope to see you at Kochanski’s. Only 5 bucks to get in. Come on in and help us give Miles Maxwell a big ole Mil-town welcome! 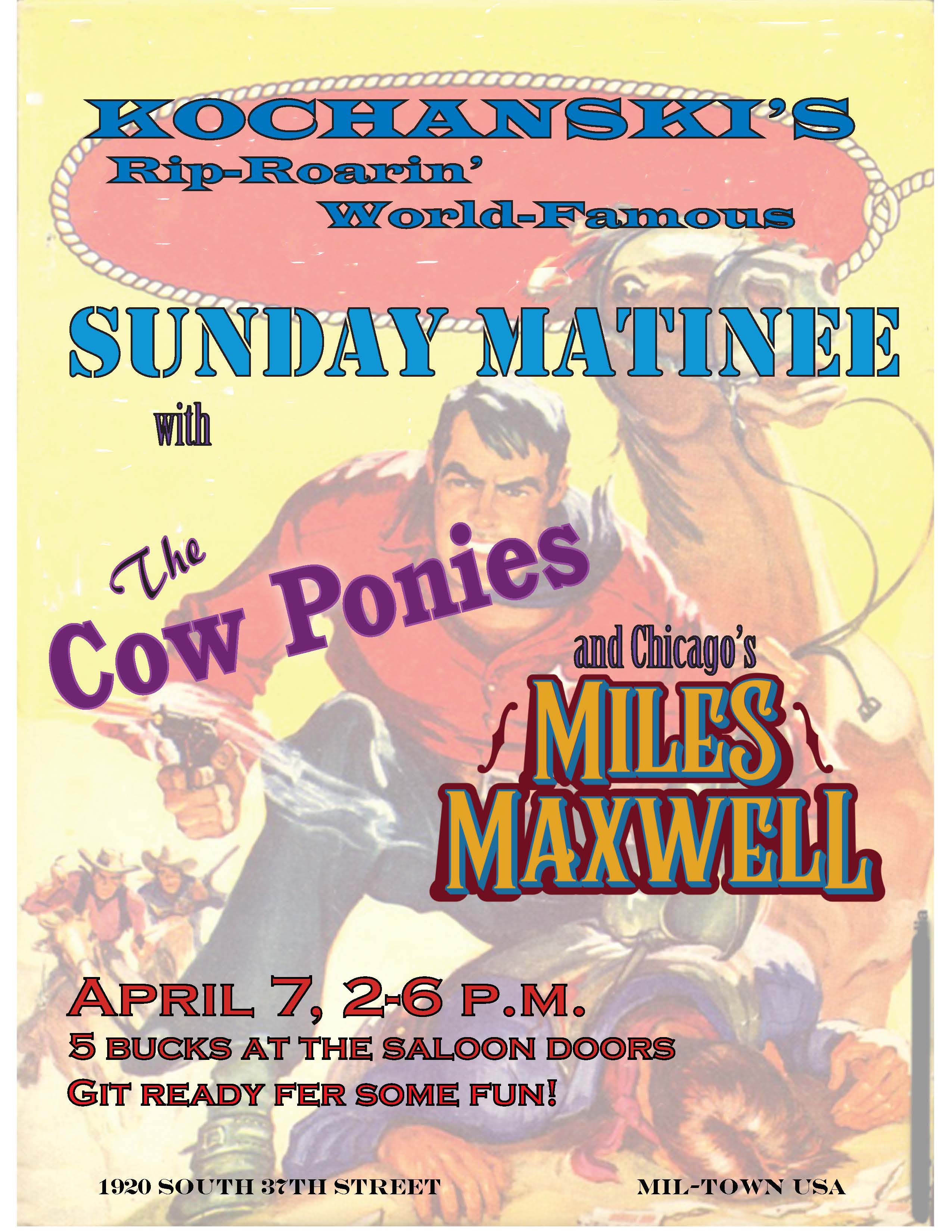 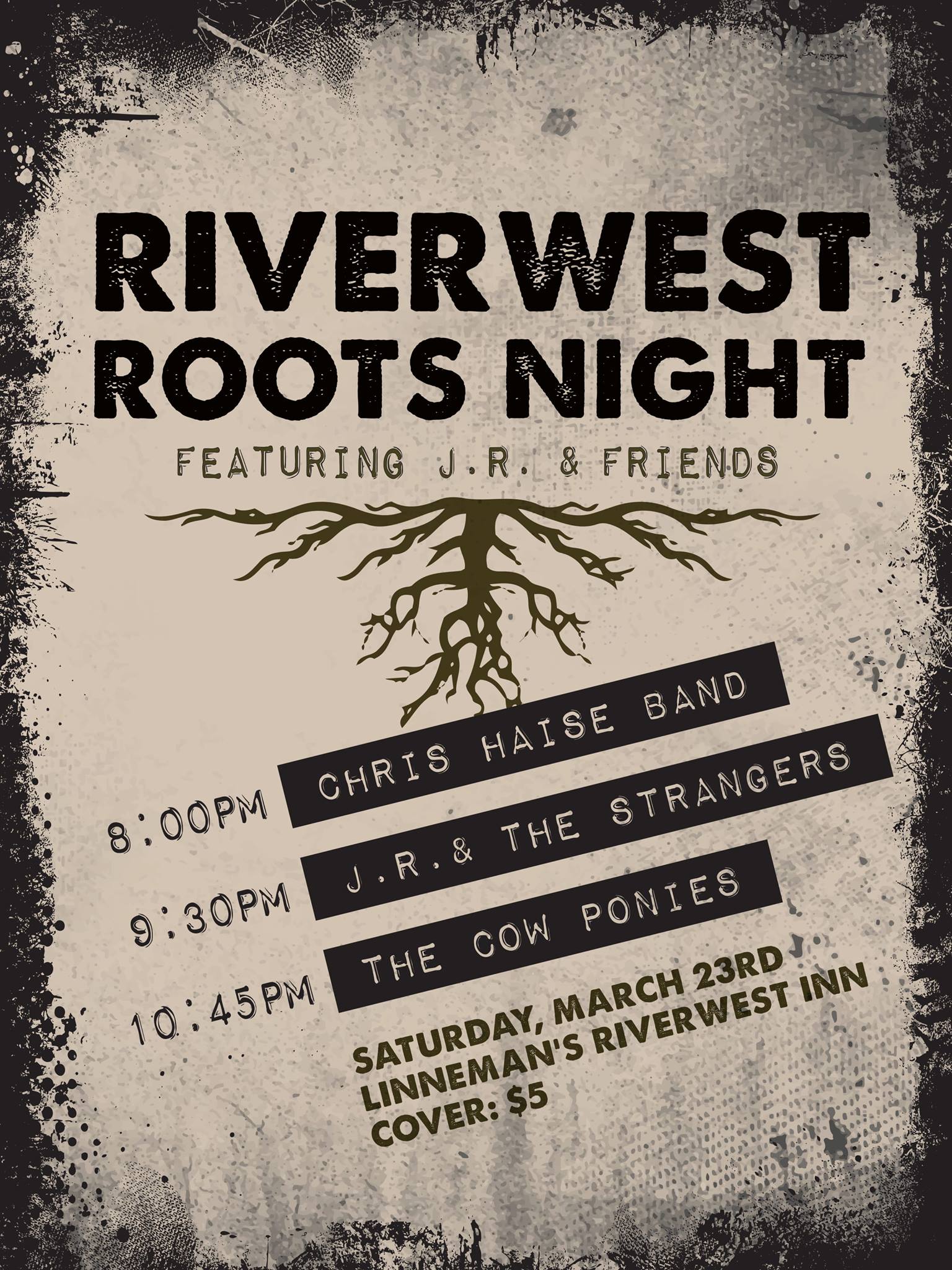